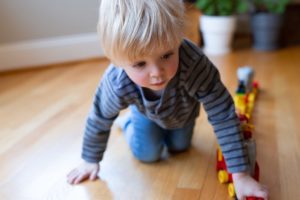 While so much has changed over the last several months because of COVID-19, the importance of better speech and hearing is just as important as ever.

And in honor of Better Speech and Hearing Month, we are highlighting stories of our families and how they are staying connected through virtual speech services and maintaining progress.

When Grayson’s mom, Ashley, was pregnant with him she was diagnosed with intrauterine growth restriction, a condition in which the unborn baby is not growing at a normal rate.

“We had weekly ultrasounds and a decision was made that he should be delivered at 36 weeks and two days,” Ashley said.

“When Grayson was born he was resuscitated twice. He was on oxygen and a feeding tube with monitors assessing his heart and respiration rate. We were told he could be in the NICU up until his due date.”

Thankfully Grayson was able to leave the NICU within a week and was able to come off oxygen and the feeding tube.

“Grayson did a great job at home but I kept a close eye on all his developmental milestones,” Ashley said.

When he was a few months old, Grayson was diagnosed with a sacral dimple, or a small indentation in the lower back near the crease of the buttocks. An ultrasound and MRI revealed that Grayson had a tethered cord and would need surgery. At 10 months old Grayson had a lumbar laminectomy.

“After spending a week in the PICU, we once again closely monitored Grayson’s developmental milestones. Up until about two years of age everything seemed to be going on track,” Ashley said.

As Grayson’s second birthday approached, his vocabulary was restricted to only one syllable words.

“He said ‘maaaa’ and ‘daaa’ instead of ‘mama’ and ‘dada.’ He was not speaking in sentences, even simple two word sentences. He grunted and pointed a lot and struggled with getting his point across, which was beginning to  make him frustrated,” Ashley said.

“When he was around other children his age, he was very shy and barely talked.”

Within a few months of his second birthday, Grayson started speech therapy with McCulloh Therapeutic Solutions and began making tremendous progress with articulation and social interaction.

“Grayson has thrived,” Ashley said of his time in speech therapy.

“He is saying multiple syllable words, sentences with three-to-four words, and interacting with children his age more appropriately.”

During COVID-19, Grayson has continued with virtual speech sessions and his family is grateful for his continued improvement.

“Therapy has still been a priority,” said Ashley, who added that she is so thankful for the early intervention Grayson received.

“We’re so happy that we noticed his difficulties with speech early on so that we could address it before starting school.”

Thank you Ashley for sharing your story. We love serving your sweet family.

Do you have questions about speech and language therapy? Look through developmental milestones on the MTSkids website. or email us at info@mtskids.com to learn more.