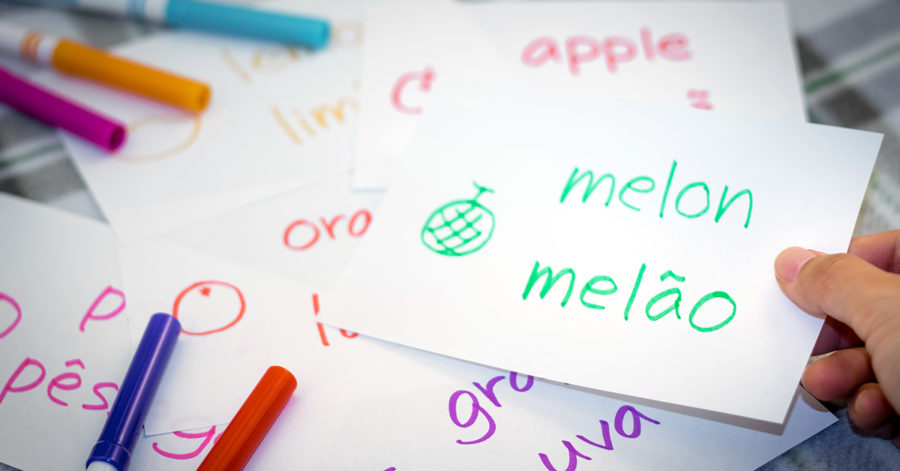 Today I am going to try and debunk some of the myths many parents have heard about children learning two languages at a time. I’d like to start by clarifying that bilingual language development is individual for each child, but there are still some of the same language developmental milestones that are shared with monolingual peers.

Myth 1
Children who have a language disorder should ONLY focus on one language.

This one is a common myth, but can be true in very few rare cases. Typically, it is more beneficial for children to learn both their home language and their school language versus leaving one language behind.

Why? If a parent is not strong in the second language (typically English for U.S.), then they are unable to provide a great language model for their developing child.

Also, bilingual language development, while it may seem challenging or complex in the first few years, can lead to greater knowledge and use of language at a later age.

Myth 2
My child uses AAC. We should only use English to label the pictures.

When using augmentative and alternative communication, it is possible to put the home language on the picture symbols as well. This can lead to better or more frequent communication with family members. This leads to greater practice and more progress!

Myth 3
My child can speak (insert language here) very well, but he is slow at learning English. It must be a language disorder.

A language disorder is only diagnosed after a child presents with difficulties in BOTH languages (after a comprehensive language evaluation in both languages). If a child has developed normally in one language, this means they do have an ability to learn language, but just may be having a hard time learning a foreign language. This would be an opportunity for the child to receive extra ESL support from school or a tutor.

Myth 4
My child just started school at an English-speaking preschool and she won’t talk to her teacher or friends. It must be a speech problem.

A common occurrence during second language learning is something called a silent period. This is a period of time when a child is focusing on learning new vocabulary and grammar, as well as cultural practices, in the new language.

If your child has not been heavily exposed to this new language before, she will need this time to learn before speaking. The silent period can last for a few weeks, or sometimes as long as a year.

Myth 5
My child keeps mixing up words from each language. I think there’s something wrong.

This is also a common occurrence during bilingual language learning. It is very natural to use the two languages in the same sentences or even to use the rules from one language while speaking the other. Kids can sort this out over time and will end up being better users of both languages, with improved cognitive abilities, by practicing organizing and knowing which language to use at which time.

Want to learn more? Take a look at this informative article from expert Scott Prath. You can also visit this resource-filled web page from the American Speech-Language-Hearing Association.

Do you ask yourself: “Are my child’s speech and language skills where they need to be?” Request a complimentary screening today!

Are you a speech-language pathologist looking to join an amazing team? Check us out!